Now wait a minute. “Soccer’s Shame; chaos at African Nations Semifinal”. That is the CNN’s breaking news banner headline. Very little surprise. Thanks to Tom Sweetman.  The content heavily skewed towards the “shame”.

At the time of writing this, Al Jazeera, VOA, Sky News and CNBC never bothered to carry this “soccer’ shame”. The Ukraine tussle and Boko Haram were prime on their agenda.

All right. Before you cast the first stone, “bizarre drama as Ghana humble host to book Elephants final”. That is www.myjoyonline.com.

Tomorrow and the days after, we’re very likely to read even more “bizarre” headlines on the despicable behaviour of the Equatorial Guinea fans as the National Lightning lost to the Black Stars. Their actions fly in the face of common sense and civility. It’s horrendous as it’s nauseating. In fact, in the simplest of terms, the action of the host fans was plain stupidity. There cannot be any justification for it, not even remotely.

But hey, this certainly isn’t an ‘African mentality’. There’s absolutely nothing African about their conduct. And so, I do not agree and cannot accept any attempt at lumping the entire continent together and taken to the cleaners. Like Americans will say, “shit happens”.

Crowd violence at stadia did not start this evening. We have seen and heard of worst occurrences. Many lives have been lost. On May 29 1985, the Heysel Stadium Disaster claimed 39 lives when hell broke loose at the at the European Cup Final between Juventus and Liverpool. This happened in Brussels, Belgium. That wasn’t a European mentality. Neither was it Soccer’s shame.

The Estadio Nacional Disaster, also known as the Lima Disaster, of May 24, 1964, remains the worst stadium disaster in association football till date. It claimed 328 lives and about 500 injuries. It was in a match between Peru and Argentina. This is South America. We have seen Europe earlier. But even this cannot be said to be an ‘American shit’.

The Hillsborough Disaster in England, yea, England, claimed 96 lives on April 15, 1989. The Karaiskakis Stadium Disaster in good old Greece took in its wake 21 lives. The list goes on and on. 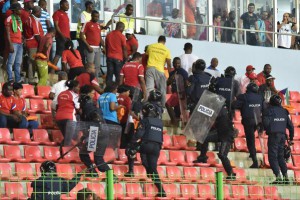