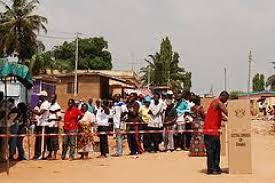 Voters in a queue

Hopefully, in this December 2020, we’d queue again to the polls to repeat our mistakes. We’ve been at this for eons. Nothing is going to change. Not soon.

We have opted for parliamentary democracy and we’ve been experimenting it for almost three decades. We have recycled our most basic mistakes; the politicians; since. They keep outdoing themselves in ridiculousness. They have taken advantage of our collective lack of sufficient angst and short memory, to visit the most ludicrous leadership on us year in and year out. Sadly, we’d still follow in their trails as soon as the whistle goes.

Very soon when the campaign reaches its cacophonous crescendo, it will be difficult for the average voter to tell why the’d choose party A over party B. Why? There’d be no contest of ideas; as has always been the case. Party foot-soldiers will be shouting themselves hoarse in a debate over who has been a bigger mess; who has stolen more; or in summary, who was incompetent and who was misled. Somehow, the followers will follow, regardless. Well, we didn’t stop following when the Brazil scandal happened. The Sports Minister was cleared and promoted to the Flagstaff House. We didn’t stop following when Muntie3 were given a presidential pardon. In fact, we staged a petition for the idiots to be released and people we thought should know better, signed up to that petition. We didn’t stop when hoodlums stormed  a court in Kumasi to free party vigilante who were being tried for attacking the Regional Security Coordinator. And oh, we didn’t stop; when in the face of all the challenges crippling our healthcare delivery and educational systems, the best use to which we could put our money; money that we did not even have; was to build a national cathedral. In fact, we have had to pull down residencies of high court judges (the state built these with loans we’re yet to start paying; and the buildings were barely five years old). Forget about the fact that we were told many lies about the very foundation of this national church building.

So you see, we will not stop following. In the voice of Buju Banton, ” another toll to the poll, may God help we soul” .

Of Intransigent Leadership and Tired Shoulders