Sir, the last time I sent you a letter, I didn’t get any response from you directly. But some of your boys did a good job of taking me on while they tried to cover up for you on the issues I raised. I imagined you were too busy paying ‘surprised visits’ to the wrong places that you did not have time to write back. I decided to wait till I hear from you. But my patience has run out and I’m compelled to write to you again. Hopefully, you should respond.

By the way, are you back from South Africa, Sir? Or you intend to stay on a little longer?

My concern this afternoon, Mr. President, is the alarming levels of nonsense and insensitivity that are bandied about and defended by your charges with sheer idiocy and arrogance lately. It all began when somebody in your government, (I can bet my last pesewa that it wasn’t your idea) decided that we should buy plane tickets for some people, send them to South Africa, lodge them, feed them and take them to the stadia to go sing and dance for the Black Stars. Initially, we heard the numbers were a thousand then later two thousand and many other figures thereafter

Assuming Mr. President without accepting, that indeed your boys have decided to send 1000 fans to SA to ‘support’ the Black Stars, the nation is sure to spend a fortune on them for the period, right? 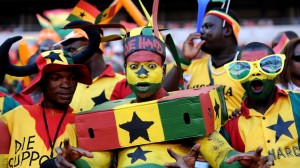 My Mathematics teacher died when I was in class 3 so I dare not go into the cost analysis. I’m only wondering if that was a venture worth the tax payer’s money. Your communications director in responding to this said ‘Ghanaians are too fastidious’ Hmmm. You see, I don’t blame the likes of Koku Anyidoho, who have very little idea how much the women in Makola market have to struggle just so that their children can feed, cloth and have access to good education. So he can afford to defend any useless move your boys make.

It breaks my heart to think that what was wrong yesterday suddenly becomes right today because there is change in government. I recall when Kufour and his boys were trumpeting on rooftops that they had built four new stadia for this country, one question that persistently came up was whether or not we were going to eat those structures. It didn’t make sense to people at the time that in a very harsh economic situation, so much money should be spent on football parks. This uselessness, among other things, cost Kufour and his party the elections in 2008. The least Ghanaians expect from you and your boys, is to learn from their stupidity. I’m sad to say Mr. President, that so far, it doesn’t look like you’ve learnt much. As such, I’m predicting that by the repetition of this sheer folly and arrogance, you and your boys are pressing the self-destruct button and that you’re likely to incur the displeasure of many sound-minded Ghanaians, come 2012.

I agree we need to ‘support’ the Black Stars. But if this is the way to go, Mr. President, I’m afraid you and your government are discouraging many young people in this country. Why am I having a lot more reasons to return to Europe, maybe for good?

I remain sincerely yours in the heat, with the fervent expectation that some day somehow, this utter crass will stop.

The Morning after the Vuvuzelas Went Dead